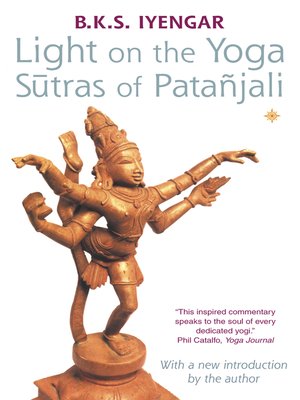 Light on the Yoga Sutras of Patanjali

PhilosophySociologyNonfiction
Note that due to the limitations of some ereading devices not all diacritical marks can be shown. BKS Iyengar’s translation and commentary on these ancient yoga sutras has been described as the "bible" of yoga.This edition contains an introduction by BKS Iyengar, as well as a foreword by Godfrey Devereux, author of Dynamic Yoga. Patanjali wrote this collection of yoga wisdom over 2,000 years ago. They are amongst the world’s most revered and ancient teachings and are the earliest, most holy yoga reference. The Sutras are short and to the point – each being only a line or two long. BKS Iyengar has translated each one, and provided his own insightful commentary and explanation for modern readers. The Sutras show the reader how we can transform ourselves through the practice of yoga, gradually developing the mind, body and emotions, so we can become spiritually evolved. The Sutras are also a wonderful introduction to the spiritual philosophy that is the foundation of yoga practise. The book is thoroughly cross-referenced, and indexed, resulting in an accessible and helpful book that is of immense value both to students of Indian philosophy and practitioners of yoga.
PhilosophySociologyNonfiction

B.K.S. Iyengar is the world’s most respected yoga teacher. Widely credited as the person who brought yoga to the West, his teaching practice has been hugely influential over decades. He lives and teaches in Pune, India.

More about B. K. S. Iyengar
Light on the Yoga Sutras of Patanjali
Copy and paste the code into your website.
New here? Learn how to read digital books for free