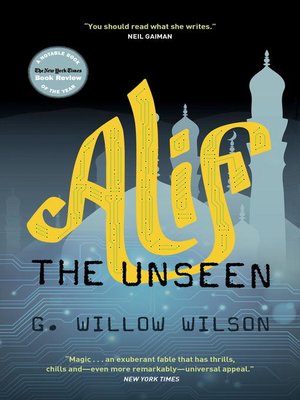 View more libraries...
A tour-de-force of a debut that blends classic fantasy — the fascinating, frightening, sometimes-invisible world of the djinn — that's genies to some of us — with the 21st-century reality of a super-hacker in mortal danger in a repressive security state on the Arabian Gulf.
Alif (that's his handle) is a brilliant young superhacker working out of his mother's small apartment, and his computer has just been breached. While Alif scrambles to protect his clients — dissidents and outlaws alike, whoever needs to hide their digital traces, he and his friends realize that they've been found by 'the Hand' — maybe a person, maybe a program, but definitely able to find anyone, and that could lead to prison, or worse. Alif, with the help of his childhood friend Dina, an ancient book sent to him in secret by his lost love (who may be frighteningly connected to the Hand) and a terrifying protector who almost looks human, must go underground — or rather, find a way into the hidden world of the djinn. They wrote the mysterious book centuries ago, and have knowledge that might just allow Alif to infiltrate the most sophisticated information technology the world has ever seen, and perhaps save himself, his loved ones, and freedom itself. With shades of Neil Gaiman, Philip Pullman, William Gibson, and the timeless Thousand and One Nights, Alif the Unseen is a tour-de-force debut with major potential — a masterful, addictive blend of the ancient and the more-than-modern, smuggled inside an irresistible page-turner.