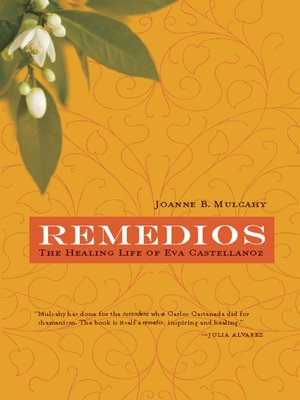 The Healing Life of Eva Castellanoz

by Joanne B. Mulcahy

Biography & AutobiographyNew AgeSociologyNonfiction
Former President Ronald Reagan called Eva Castellanoz a "national treasure" when he awarded her an NEA National Heritage Fellowship in 1987. Featured in National Geographic, National Public Radio, and numerous other publications, Castellanoz is celebrated as a folk artist, community activist and a curandera, a traditional Mexican healer who uses a mind-body-spirit approach. During her 16 year friendship with Joanne Mulcahy, Castellanoz has revealed her life story as well as her remedios — her remedies, both medicinal and metaphoric — for life's maladies. Using her own observations and Castellanoz’s stories, Mulcahy employs creative nonfiction and oral accounts to portray the life, beliefs, and practices of this remarkable woman. Anyone who has been healed by Eva Castellanoz has felt her power and wisdom. Anyone who reads this vivid portrait will come away feeling wiser and empowered by the story of this courageous and loving healer.
Biography & AutobiographyNew AgeSociologyNonfiction

Joanne B. Mulcahy is folklorist-in-residence at Lewis and Clark College in Portland, Oregon. She also teaches creative nonfiction, ethnographic writing, and humanities classes at Lewis and Clark's Northwest Writing Institute. She is the author of ...

More about Joanne B. Mulcahy
Remedios
Copy and paste the code into your website.
New here? Learn how to read digital books for free