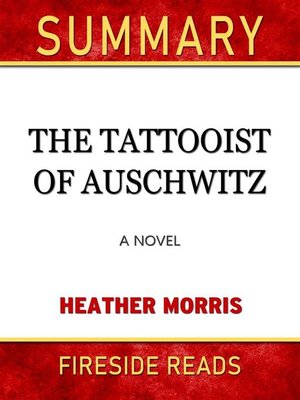 View more libraries...
Learn the Invaluable Lessons from The Tattooist of Auschwitz: A Novel by Heather Morris and Apply it into Your Life Without Missing Out!


What's it worth to you to have just ONE good idea applied to your life?

In many cases, it may mean expanded paychecks, better vitality, and magical relationships.

Here's an Introduction of What You're About to Discover in this Premium Summary of The Tattooist of Auschwitz: A Novel by Heather Morris :

Heather Morris has succeeded in producing a wonderful book which centers around love during a very dark period in world history. In literature, the holocaust most often tells the horrendous experiences of those who survive the iron hand of the Nazi rule. Heather Morris envisioned a different retelling and thus created The Tattooist of Auschwitz which is a work of fiction (based on firsthand experiences) which tells of the struggles, love and survival of Lale Sokolov and Gita Furman.

In order to write this book, Heather Morris sat down with Sokolov, born Ludwig "Lale" Eisenberg, to listen and record his story. It took over three years for her to record the entire story. Sokolov, was a tattooist from the most infamous concentration camp, Auschwitz. Prior to his death in 2006, Sokolov made the final effort to tell the world how he triumphantly survived the holocaust and won the heart of the love of his life.

The book has earned the respect and admiration of the readers around the world. As an acknowledgement of Morris' superb effort, the book has been translated into 17 languages, with rights sold in 43 countries. Morris is an Australian-based writer. But in the United States alone, her book has gained popularity with over half a million copies in print. The book earned a No. 1 spot on The New York Times paperback fiction list for eight consecutive weeks in 2018.

Scroll Up and Buy Now!

Faster You Order - Faster You'll Have it in Your Hands!

*Please note: This is a summary and workbook meant to supplement and not replace the original book.