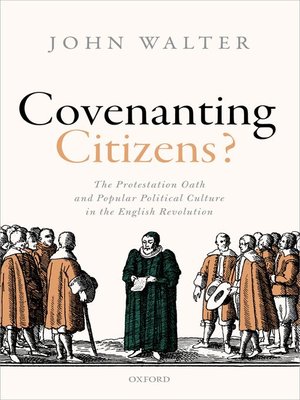 Covenanting Citizens throws new light on the origins of the English civil war and on the radical nature of the English Revolution. An exercise in writing the 'new political history', the volume challenges the discrete categories of high and popular politics and the presumed boundaries between national and local history. It offers the first full study of the Protestation, the first state oath to be issued under parliamentary authority. The politics behind its introduction into Parliament, it argues, challenges the idea that the drift to civil war was unintended or accidental. Used as a loyalty oath to swear the nation, it required those who took it to defend king, church, parliament, and England's liberties. Despite these political commonplaces, the Protestation had radical intentions and radical consequences. It envisaged armed resistance against the king, and possibly more. It became a charter by which parliament felt able to fight a civil war and it was used to raise men, money, and political support. Requiring resistance against enemies that might include a king himself contemplating the use of political violence, the Protestation offered a radical extension of membership of the political nation to those hitherto excluded by class, age, or gender. In envisaging new forms of political mobilisation, the Protestation promoted the development of a parliamentary popular political culture and ideas of active citizenry. Covenanting Citizens demonstrates how the Protestation was popularly appropriated to legitimise an agency expressed in street politics, new forms of mass petitioning, and popular political violence.