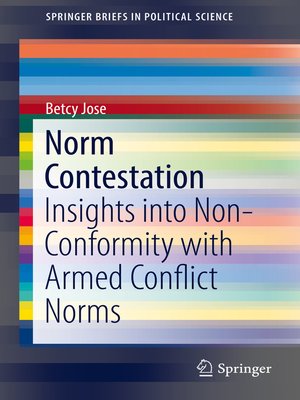 PoliticsNonfiction
This Brief uses the theory of norm contestation as a model for understanding variation in norm-related behavior in international relations. While most typical approaches to understanding norms view norms as stable structures and actor responses to them as unquestioned, in a global political climate where departures from expected behavior may occur, a more nuanced model is needed. By using a norm contestation framework that highlights norm fluidity and actor agency, this book expands the discussion, providing insight into divergent interpretations of norm violation and compliance and the dynamic nature of norms. The first two chapters introduce the norm contestation model, explain how it contributes to the literature on norm violations, and discuss the reasons for the cases discussed. Chapters Three and Four provide detailed case studies of the mechanisms of norm contestation as they apply to the civilian immunity and non-intervention norms. Chapter Five concludes by reconnecting the norm contestation model to the case studies and describing how it can be applied to norms other than those regulating armed conflict. It also discusses policy implications and avenues for future research. As such, this book will appeal to students and researchers working broadly on issues related to international relations theory, armed conflict, security studies, humanitarianism, human rights, international law, and global governance. It will also be of interest to policy-makers and practitioners interested in influencing the normative behavior of actors in diverse arenas.
PoliticsNonfiction

Norm Contestation
Copy and paste the code into your website.
New here? Learn how to read digital books for free