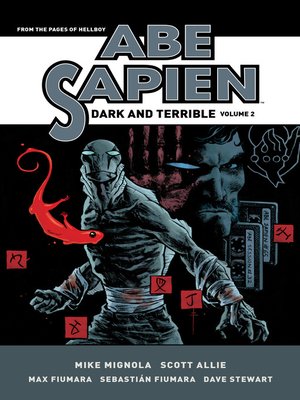 View more libraries...
One of the great mysteries of the Hellboy world is revealed as Abe uncovers his connections to the monsters threatening to end the world.

When monsters began to tear down civilization, suspicion fell on Abe Sapien, who resembled the frogmen plaguing mankind. The two volumes of Dark and Terrible tell the complete story of Abe's quest to prove his innocence as he went AWOL from the Bureau of Paranormal Research and Defense.

At first he ran from the truth, but as this volume picks up he's ready to face facts about his origins and his purpose in the world—revealed in classically oblique Mignola style—all while being pursued by a mad necromancer who feels betrayed by the Devil and is eager to use Abe to gain new power amongst the creatures that have created a Hell on Earth.