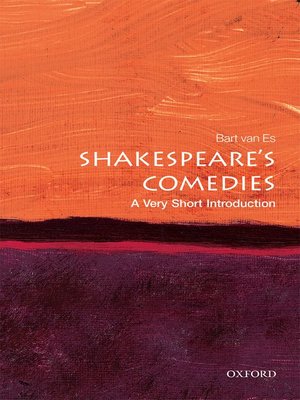 From The Two Gentlemen of Verona in the early 1590s to The Two Noble Kinsmen at the end of his career around 1614, Shakespeare wrote at least eighteen plays that can be called 'comedies': a far higher number than that for any other genre in which he wrote. So what is a Shakespearean comedy? We associate these plays with such themes as mistaken identities, happy marriages, and exuberant cross dressing, but how representative are these of the oeuvre as a whole? In this Very Short Introduction, Bart van Es explores the full range of the playwright's comic writing, from the neat classical plotting of early works like The Comedy of Errors to the corrupt world of the so-called problem plays, written in the middle years of Shakespeare's life. Examining Shakespeare's influences and sources, van Es compares his plays to those of his rivals, and looks at the history of the plays in performance, from the biographies of Shakespeare's original actors to the plays' endless reinvention in modern stage productions and in films. Identifying the key qualities that make Shakespearean comedy distinctive, van Es traces the changing nature of Shakespeare's comic writing over the course of a career that spanned nearly a quarter century of theatrical change.

About the Series: The Very Short Introductions series from Oxford University Press contains hundreds of titles in almost every subject area. These pocket-sized books are the perfect way to get ahead in a new subject quickly. Our expert authors combine facts, analysis, perspective, new ideas, and enthusiasm to make interesting and challenging topics highly readable.