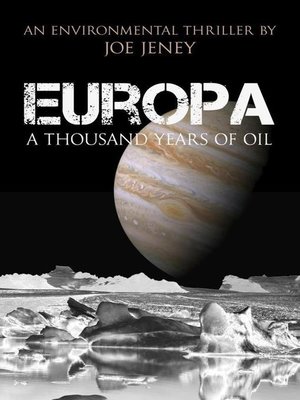 It's finally happening: the world is running out of oil. As major nations jockey and feud for the last carbon resources on the planet, one oil company sets its sights on the vast energy reserves of Europa, one of the largest of Jupiter's moons.

Thought to have twice as much water as Earth, Europa offers humanity the best chance of finding microorganic life within the solar system—life that would prohibit harvesting the moon’s resources under international space laws. To confirm the presence or absence of life, Earth’s leaders plan a manned mission to Europa.

Jamie Caldicott, husband, father, and hero of a botched Mars mission, grudgingly accepts a position on the crew. His main concern is providing for his family. The presence or absence of Europan life doesn't much interest him.

As the mission progresses, however, it becomes evident that powerful interests plan to harvest Europa whether or not life exists. As they journey farther from Earth than any manned craft before them, Caldicott discovers that some of his crewmates aren’t who they claim to be.

The fates of two worlds depend on Jamie Caldicott. If he makes the wrong choice, he'll never return from Europa's icy surface.

A thrilling mix of Jules Verne and An Inconvenient Truth, Europa offers a glimpse of the upcoming energy crisis and the steps humanity must take to survive its addiction to carbon fuels.

"IndieReader Approved. Fans of sci-fi novels will enjoy J. J. Co's EUROPA, a fast-paced thriller set on one of Jupiter's moons....Plenty of high-stakes scenes are included....EUROPA offers a fun read for sci-fi devotees." IndieReader
"...well-written story of what could be a possible future with suspense and intrigue on almost every page. The cast of characters is diverse and their interaction sets the stage for much of the action." Paul Johnson for Readers' Favorite