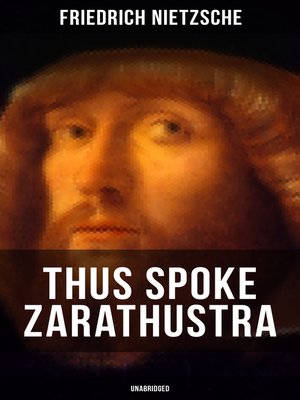 FictionLiterature
Thus Spoke Zarathustra is a philosophical novel which deals with ideas such as the "eternal recurrence of the same", the parable on the "death of God", and the "prophecy" of the Übermensch. The book talks about the old wise man who descends from his mountain among the people, out of a desire to learn something from them and to donate his wisdom to people. He encounters a variety of people and learns their secrets and reveals that he is actually looking for a man equal to himself. Many do not understand his philosophy and ridicule him, but there are those who admire him. Friedrich Nietzsche (1844-1900) was a German philosopher, cultural critic, poet, and Latin and Greek scholar whose work has exerted a profound influence on Western philosophy and modern intellectual history. Before turning to philosophy, he began his career as a classical philologist and worked at the Department of Classical Philology at the University of Basel, but he had to retire due to health problems. Nietzsche's body of writing spanned philosophical polemics, poetry, cultural criticism, and fiction, and drew widely on art, philology, history, religion, and science. His writing displayed a fondness for aphorism and irony, while engaging with a wide range of subjects including morality, aesthetics, tragedy, epistemology, atheism, and consciousness. Along with Soren Kierkegaard he is considered to be one of the founders of existentialism.
FictionLiterature

Thus Spoke Zarathustra
Copy and paste the code into your website.
New here? Learn how to read digital books for free