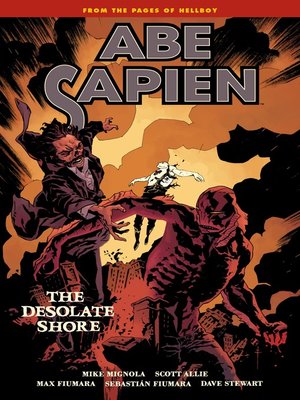 View more libraries...
On the run at the end of the world, Abe Sapien's Dark and Terrible story reaches its finale, and the answers he uncovers about his own existence reveal some of the biggest secrets of the Hellboy saga.
AWOL from the Bureau for Paranormal Research and Defense for more than a year, Abe travels to lost two lost kingdoms before returning to America. There he'll confront the most nightmarish version of the fate he's run from all along, as well as the necromancer who sees Abe as a means to control the end of mankind.
Collects Abe Sapien #32-37
Praise for the comics that comprise Abe Sapien Volume 8: The Desolate Shore:
"The art by Max Fiumara is still tremendous too. Along with Dave Stewart's darkly textured color work, this series is so monster-ifficly good looking, I wish each issue would never end." -Coverless Reviews
"If you already like Abe Sapien, you will continue to like it—buy this! If you like Hellboy but aren't reading Abe Sapien, you will definitely also like it!" -Geeks With Wives