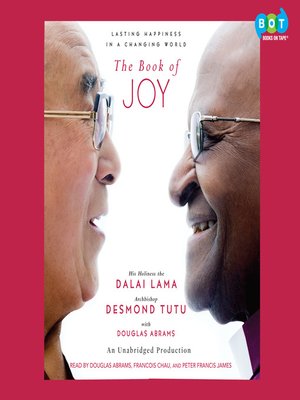 The Book of Joy

Lasting Happiness in a Changing World

New AgeReligion & SpiritualitySelf-ImprovementNonfiction
Two great spiritual masters share their own hard-won wisdom about living with joy even in the face of adversity.

The occasion was a big birthday. And it inspired two close friends to get together in Dharamsala for a talk about something very important to them. The friends were His Holiness the Dalai Lama and Archbishop Desmond Tutu. The subject was joy. Both winners of the Nobel Prize, both great spiritual masters and moral leaders of our time, they are also known for being among the most infectiously happy people on the planet.
From the beginning the book was envisioned as a three-layer birthday cake: their own stories and teachings about joy, the most recent findings in the science of deep happiness, and the daily practices that anchor their own emotional and spiritual lives. Both the Dalai Lama and Archbishop Tutu have been tested by great personal and national adversity, and here they share their personal stories of struggle and renewal. Now that they are both in their eighties, they especially want to spread the core message that to have joy yourself, you must bring joy to others.
Most of all, during that landmark week in Dharamsala, they demonstrated by their own exuberance, compassion, and humor how joy can be transformed from a fleeting emotion into an enduring way of life.
Narration Credits:
Douglas Carlton Abrams, read by the author
Dalai Lama, read by Francois Chau
Desmond Tutu, read by Peter Francis James
From the Compact Disc edition.
New AgeReligion & SpiritualitySelf-ImprovementNonfiction

His Holiness the 14th Dalai Lama, Tenzin Gyatso, describes himself as a simple Buddhist monk. He is the spiritual leader of the Tibetan People and of Tibetan Buddhism. He was awarded the Nobel Peace Prize in 1989 and the US Congressional Gold Meda...

The Book of Joy
Copy and paste the code into your website.
New here? Learn how to read digital books for free