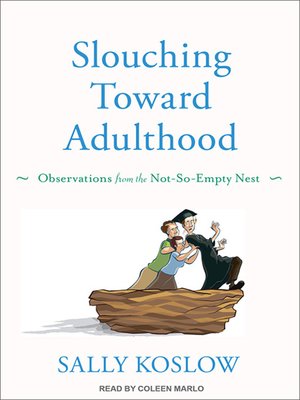 Observations from the Not-So-Empty Nest

Biography & AutobiographyFamily & RelationshipsNonfiction
Millions of American parents sit down to dinner every night, wondering why fully grown children are joining them-or, more likely, grunting good-bye as they head out for another night of who knows what. Sally Koslow, a journalist, novelist, and mother of two "adultescents" digs deep to reveal what lies behind the current generation's unwillingness-or inability-to take flight.By delving into the latest research and conducting probing interviews with both frustrated parents and their frustrated offspring, Koslow uses humor, insight, and honest self-reflection to give voice to the issues of prolonged dependency. From the adultescent's relationship to work (or no work), money (that convenient parental ATM), or social life, Slouching Toward Adulthood is a provocative, razor-sharp, but heartfelt cri de coeur for all the parents who sent their kids to college only to have them ricochet home with a diploma in one hand and the DVR remote in the other.
Biography & AutobiographyFamily & RelationshipsNonfiction

Sally Koslow, who was born and raised in Fargo, North Dakota, is the former editor in chief of McCall's magazine.

More about Sally Koslow
Slouching Toward Adulthood
Copy and paste the code into your website.
New here? Learn how to read digital books for free