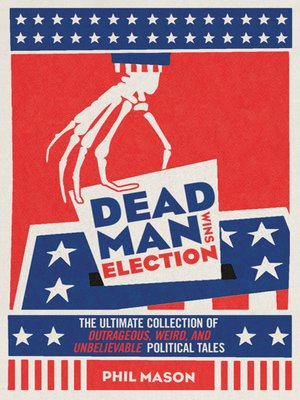 The Ultimate Collection of Outrageous, Weird, and Unbelievable Political Tales

Despite our differences, there's a common thread uniting all of us: absurd political screw-ups happen. Welcome to Dead Man Wins Election, the ultimate collection of bizarre and outright un bel ievable tales from politics at home and around the world. Uncover the least competent politicians, the most outlandish government decisions, the strangest election results, and much more. Former president Bill Clinton, who touted his presidency as the watershed period for the modern Information Age. After his White House departure, it was disclosed that of the forty million emails his office produced, CLINTON HIMSELF HAD SENT...TWO. Harry Stonebreaker, who was reelected for mayor of Winfield, Missouri, despite having died a month before polling day. HE WON BY A LANDSLIDE WITH 90 PERCENT OF THE VOTE.

Dead Man Wins Election
Copy and paste the code into your website.
New here? Learn how to read digital books for free