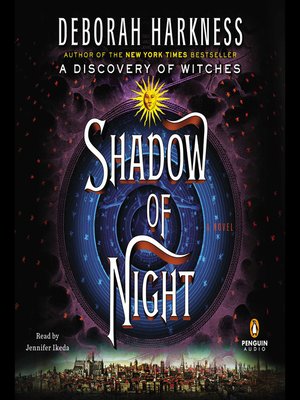 View more libraries...
The #1 New York Times-bestselling sequel to A Discovery of Witches, book two of the All Souls Series.

All three seasons of the hit TV series “A Discovery of Witches” are streaming now on AMC+, Sundance Now and Shudder.
Picking up from A Discovery of Witches' cliffhanger ending, Shadow of Night takes reluctant witch Diana Bishop and vampire geneticist Matthew Clairmont on a trip through time to Elizabethan London, where they are plunged into a world of spies, magic, and a coterie of Matthew's old friends, the School of Night. As the search for Ashmole 782—the lost and enchanted manuscript whose mystery first pulled Diana and Matthew into one another's orbit—deepens and Diana seeks out a witch to tutor her in magic, the net of Matthew's past tightens around them. Together they find they must embark on a very different - and vastly more dangerous - journey.
"A captivating and romantic ripping yarn,"** Shadow of Night confirms Deborah Harkness as a master storyteller, able to cast an "addictive tale of magic, mayhem and two lovers."**
*E.L. James