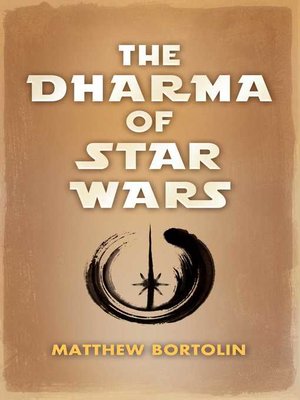 The Dharma of Star Wars

PhilosophyNonfiction
Is Yoda a Zen Master? What might Jedi training be like? Is the story of Luke Skywalker a spiritual epic?

The answers—as well as excitement, adventure, and a lot of fun—are here!

The Dharma of Star Wars uses George Lucas' beloved modern saga and the universal discoveries of the Buddha to illuminate each other in playful and unexpectedly rewarding ways. Bortolin even reveals satisfying depths to the second trilogy of movies-the ones that met with what can understatedly be called a less-than-warm critical reception. The Dharma of Star Wars gives you an inpsiring and totally new take on this timeless saga, from A New Hope all the way up to 2005's Revenge of the Sith. Great fun for any Star Wars fan. Imagine The Power of Myth... with lightsabers!

Includes instruction in The Jedi Art of Mindfulness and Concentration and The Padawan Handbook: Zen Contemplations for the Would-Be Jedi.

Fun for all ages, The Dharma of Star Wars is also a perfect way for Buddhist parents to bridge the generation gap.
PhilosophyNonfiction

Matthew Bortolin camped out for tickets to all the Star Wars movies, and a set of Jedi robes hangs in his closet. He is an ordained member of Thich Nhat Hanh's Buddhist community, and has lived in Buddhist monasteries both in the United States and...

More about Matthew Bortolin
The Dharma of Star Wars
Copy and paste the code into your website.
New here? Learn how to read digital books for free