Put Me Back on My Bike 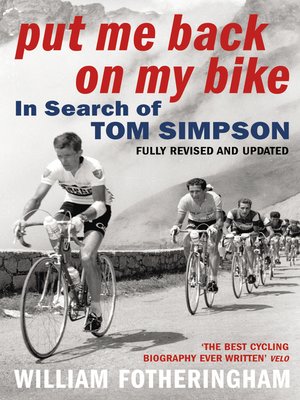 Discover the story of Britain's ultimate cyclist and his ill-fated race during the 1967 Tour de France, from the bestselling author of Half Man Half Bike

Tom Simpson was an Olympic medallist, world champion and the first Briton to wear the fabled yellow jersey of the Tour de France. He died a tragic early death during the 1967 Tour. A man of contradictions, Simpson was one of the first cyclists to admit to using banned drugs, and was accused of fixing races, yet the dapper 'Major Tom' inspired awe and affection for the obsessive will to win which was ultimately to cost him his life.

Put Me Back on My Bike revisits the places and people associated with Simpson to produce the definitive story of Britain's greatest ever cyclist. The fully revised and updated edition of William Fotheringham's classic biography features a new foreword and postscript further exploring the truth behind the legend.

Biography & Autobiography Sports & Recreations Nonfiction
Put Me Back on My Bike
New here? Learn how to read digital books for free