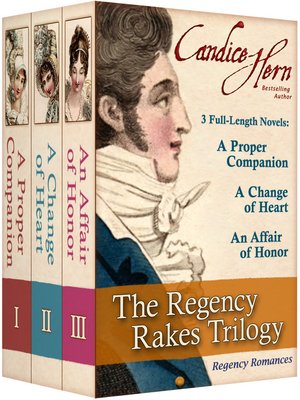 This bargain-priced omnibus edition includes three full-length novels by bestselling author Candice Hern: A PROPER COMPANION, A CHANGE OF HEART, and AN AFFIAR OF HONOR. Fans of the traditional Regency Romances of Georgette Heyer, Barbara Metzger, and Carla Kelly will enjoy these witty, sweet romances about three rakish friends who each finds his life changed dramatically when he meets the right woman.

A PROPER COMPANION: Robert, Lord Bradleigh, is a rakish earl with a recently arranged betrothal to a lovely young girl he barely knows. Emily Townsend is an impoverished, though well-born, spinster employed as a companion to his grandmother, the formidable dowager countess. Robert reluctantly agrees to help his grandmother find a husband for Emily. But once he comes to know her and care for her, he begins to regret his hasty, passionless engagement. This sparkling tale will take you from the Pump Room at Bath to the ballrooms of London, as the unexpected and undeniable attraction between Robert and Emily blossoms into something more ... something that could put one of them in danger.

A CHANGE OF HEART: Jack, Lord Pemerton, is a cynical rake forced by family circumstances to seek a bride. Lady Mary Haviland is a plain, charming, but firmly on-the-shelf spinster who offers to help Jack by presenting him with suitable candidates. When Jack discovers information that makes Mary the perfect candidate, their comfortable friendship takes an unexpected turn. By turns witty and emotional, A CHANGE OF HEART follows the path of two wounded souls from friendship to betrayal to redemption. The ballrooms of London and the rugged cliffs and coves of the South Devon coast come alive in this poignant tale of the healing power of love.

AN AFFAIR OF HONOR: During Meg Ashburton's single London Season she had been a wallflower ignored by all of Society. Except for one man. Lord Sedgewick had danced with her, and she had secretly fallen in love with him. Now, six years later, a carriage accident drops a near-dead Lord Sedgewick practically on her doorstep. Hoping for a second chance at love with him, Meg instead finds her world turned upside-down. From a famous stud farm in the Suffolk countryside to the ballrooms of London, Regency England comes alive in this charming romance.

"Candice Hern is a striking talent of superior merit, one whose intelligence, wit, and craftsmanship are as impressive as her elegant romantic sensibility." —Romantic Times