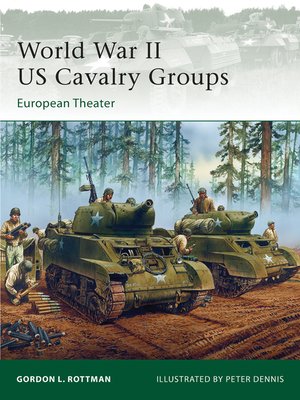 The cavalry regiments of the US Army were in the process of being transformed into a mechanized force when the USA entered World War II. While those cavalry regiments deployed to the Pacific to fight the Japanese were turned into infantry units, those sent to Europe were employed as light armor in the cavalry's traditional spearhead roles -- reconnaissance, the screening of advances and flanks, and the pursuit of beaten enemy forces. Equipped with M8 Greyhound armored cars, M5 Stuart and M24 Chaffee light tanks, and halftracks, these units were designated cavalry groups (mechanized), each c. 1,700 strong and divided into two heavily armed squadrons. They were seldom attached to divisions, but to higher-level corps commands, meaning they could be shifted around quickly and independently and be formed at need into flexible battle groups with armored, infantry, and other units, depending on the mission. Featuring specially drawn full-color illustrations depicting uniforms, insignia, armored vehicles, and tactical scenarios, this is the story of the US cavalry units that led the advance to victory in Europe during World War II.