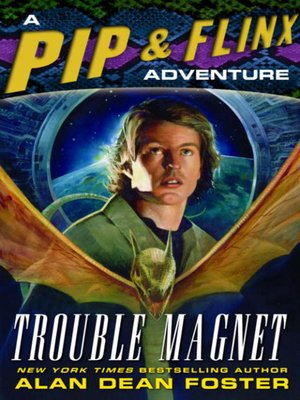 View more libraries...
From science fiction icon Alan Dean Foster comes a blazing Pip & Flinx adventure for fans of the green-eyed redhead with awesome mental powers and his miniature flying dragon. In this dazzling novel, Flinx confirms his status as the galaxy’s greatest magnet for big trouble.
Wandering out there in some remote region of the galaxy is a gargantuan sentient Tar-Aiym weapons’ system. All Flinx has to do—while his pals look after his injured love Clarity Held—is find the hefty object and persuade it to knock out the monstrous evil that is hurtling through space to waste the entire Commonwealth.
A no-brainer, really, especially for Flinx, who is never without his loyal entourage of official snoops, crazed zealots, assorted goons, and the occasional assassin. Indeed, the boy wonder and his mini-drag, Pip, are eager to commence their heroic task . . . just as soon as Flinx visits Visaria—a dangerously depraved planet—to convince himself that humans are indeed worth saving.
The chances of stumbling across high moral values and utopian ideals don’t look promising–what with Flinx playing a lawless Pied Piper to a gang of lying, thieving juvenile delinquents. But prospects really go south when Flinx runs afoul of the corrupt planet’s ruthless crime king.

Still, life is full of surprises, and Flinx is about to get smacked by a passel of them—by turns devastating, heartening, and positively jaw-dropping. For although Flinx came to Visaria to plumb the enigma of humankind, there’s another mystery waiting here, a shocking clue about his own shadowy past.