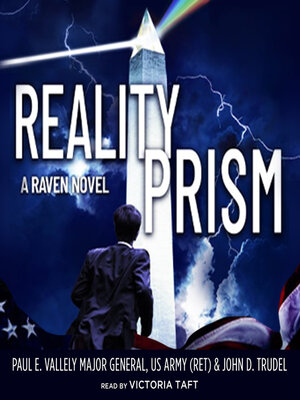 View more libraries...
Raven is back in Reality Prism: A Raven Novel! And the future of the country is on the line.
John D. Trudel's predictive thriller is centered around Raven, a cast-off CIA special operator whose career was saved by a mysterious professor, who has the ear of the highest echelon of the West Wing. After being sheep-dipped, Raven now runs his own black ops group with Josie, whose special talents make her a "national treasure."
Deep State actors threaten the U.S. republic. Raven and Josie must stop them.
The novel is set against the bracing non-fiction portion of this hybrid work, Reality Prism: A Raven Thriller, by Major General Paul E. Vallely, U.S. Army (Retired).

Reality Prism: A Raven Thriller is a memoir, a predictive thriller, a recent history of events, a tour through 21st Century geopolitics, and an Endgame.
It overviews the ripping apart of our Constitutional Republic by a pack of enemies, traitors, and deep state officials who now serve themselves, not those who elected them.
The authors highlight the "Awakening of America," The Global Shadow Government, and how we must stand united.
Orwell was right. Communication and media have massive influence in an age of Mind War, Bio-Warfare, Big Tech censorship, cancel culture, and false flag deceptions. America faces many external and internal threats that drive to dismantle America as we have known it. We are less free than we were before 1776.
Reality Prism discusses what is happening to destroy our Western Civilization, who did it, and what We the People can do to prevent a new Dark Age. We use a mix of predictive fiction and non-fiction to get the message across. Chapters discuss the threats we face. comprehensive and terrifying, but nonetheless true.
Chapters are actionable. They suggest what we can and must do to regain our freedom, prosperity, and safety. To take America back.