The Death of John Lacey 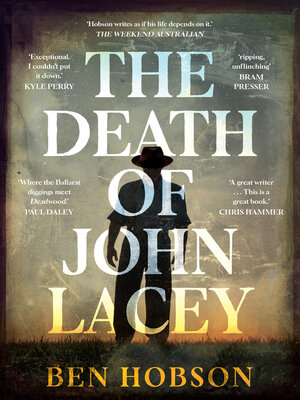 An Australian western set in the goldfields of Ballarat, The Death of John Lacey is a viscerally powerful story of greed, power and violence from the author of Snake Island.

'A ripping, unflinching reckoning with Australia's past. Hobson turns the popular national mythos on its head and, with guns blazing, creates one of his own.'

Bram Presser, author of The Book of Dirt

He felt the lump of gold still in his pocket. He would find his way out of this place and leave his brother happy and he would etch his name into the red earth or be damned.

John Lacey's lust for power and gold brings him riches and influence beyond his wildest dreams. Only he knows the terrible crime he committed to attain that wealth. Years later, as Lacey ruthlessly presides over the town he has built and named after himself, no one has the courage to question his power or how he wields it.

Brothers Ernst and Joe Montague are on the run from the law. They land in Lacey's town and commit desperate crimes to avoid capture. Lacey vows retribution and galvanises those in the town to hunt them down. But not everyone is blind to Lacey's evil, and a reckoning is approaching.

A visceral, powerful dissection of dispossession, colonisation and the crimes committed in their name, The Death of John Lacey is also a moving and tender account of the love between brothers and a meditation on the true meaning of mercy and justice.

'A powerful morality tale that evokes the hopes and brutalities of Australia's frontier with clarity, depth and empathy. Ben Hobson is a great writer. This is a great book.' Chris Hammer, author of The Tilt

'Where the Ballarat diggings meet Deadwood. Elegantly written and deeply unsettling, The Death of John Lacey is a gripping, evocative moral exploration of colonial violence, greed and dispossession on the Victorian goldfields.' Paul Daley, author of Jesustown

'Hobson shows us the frontier as it really was-a place full of human complexity. A brutal story, lyrically told.' Rohan Wilson, author of The Roving Party

'Exceptional. I couldn't put it down.' Kyle Perry, author of The Deep

'There is such weight to the narrative, such a sense of impending doom, that you don't dare take your eyes off the page.'

'[Hobson's] spare, muscular writing is captivating; and in the end, the scales are evenly weighted: corruption, rage and revenge are counterbalanced by loyalty, faith and redemption.'

The Saturday Paper on Snake Island