How to Kill a Client 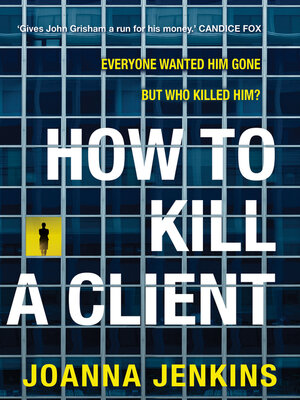 Taking on law's old boys club can have deadly results... A gripping thriller from a bold new voice about misogyny, corruption and the legal industry.

'Keeps you gripped ... The perfect tonic for anyone who has had a difficult client.' RICHARD BEASLEY SC and author of Hell Has Harbour Views

'Everyone is going to say what a great guy and a great lawyer he was. He wasn't. He was a prick ... And a shithouse lawyer.'

Gavin Jones is dead at thirty-nine. As an in-house lawyer who controlled millions of dollars in fees per year, he was legal firm Howard Greene's biggest client and wielded that power with manipulative contempt. But he saved his worst behaviour for women, at work and at home.

The partners of Howard Greene relied on his favour to fund their lavish lifestyles. If sycophantic admiration of the man was all it took to secure work from Gavin, that's what they delivered.

But no one liked Gavin. The list of those who suffered from his cruelty was long enough to include pretty much everyone who had contact with him. So who actually killed him?

A fast-paced and wickedly funny thriller about power and revenge set in the pristine towers of capitalism, How to Kill a Client is a scorching debut straight out of tomorrow's headlines.