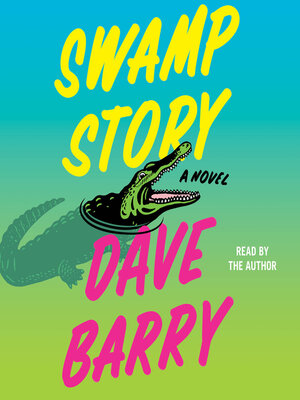 View more libraries...
Pulitzer Prize–winning New York Times bestselling author and actual Florida Man Dave Barry returns with a Florida caper full of oddballs and more twists and turns than a snake slithering away from a gator.
Jesse Braddock is trapped in a tiny cabin deep in the Everglades with her infant daughter and her ex-boyfriend, a wannabe reality TV star who turned out to be a lot prettier on the outside than on the inside. Broke and desperate for a way out, Jesse stumbles across a long-lost treasure, which could solve all her problems—if she can figure out how to keep it. The problem is, some very bad men are also looking for the treasure, and they know Jesse has it.

Meanwhile, Ken Bortle of Bortle Brothers Bait and Beer has hatched a scheme to lure tourists to his failing store by making viral videos of the "Everglades Melon Monster." The Monster is in fact an unemployed alcoholic newspaperman named Phil wearing a Dora the Explorer costume head. Incredibly, this plan actually works, inspiring a horde of TikTokers to swarm into the swamp in search of the monster at the same time villains are on the hunt for Jesse's treasure. Amid this mayhem, a presidential hopeful arrives in the Everglades to start his campaign. Needless to say, it does not go as planned. In fact, nothing in this story goes as planned. This is, after all, Florida.