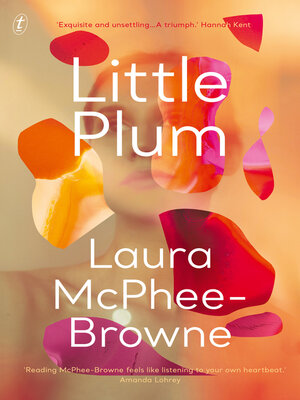 And she wants to love it, the little plum. It's just that she can't yet think of it as what it is becoming: a baby, and not just a piece of fruit.

Coral is tapping and shrugging more than usual. She is trying to stop the creature in her head from taking hold.

Laura McPhee-Browne is a writer and social worker living in Melbourne, on Wurundjeri land. Her short stories have been published widely in Australia. Cherry Beach (2020), her first novel, won a NSW Premier's Literary Award.

'The debut of Melbourne-based Laura McPhee-Browne is a poetic, languid, melancholic and sensitive meditation on trying to carve your own path in that liminal period between the freedom of childhood and the responsibilities of adulthood.' Age on Cherry Beach

'Cherry Beach is a tender and bruising coming-of-age novel. McPhee-Browne's writing is both poetic and economical, finely attuned to the exhilaration and doom of youth, unfamiliar cities and new relationships.' Miles Franklin Award-winner Jennifer Down on Cherry Beach

Australian audiences may not often encounter in their local fiction...Lusciously evocative prose...Another queer woman hero to add to the slim but beloved catalogue scrounged from Australian literature's meagre offerings.' Meanjin on Cherry Beach