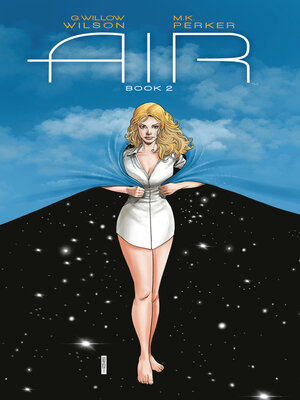 View more libraries...
The adventure continues in Volume 2 of this genre-bending, death-defying, Eisner-nominated series by acclaimed author G. Willow Wilson (Invisible Kingdom, Ms Marvel, The Bird King) and celebrated illustrator M.K. Perker (The New Yorker, Mad Magazine, The Unwritten, Fables).
Acrophobic flight attendant Blythe has left her safe, sterile life for a world of strange danger. And she's been taken under the wing of none other than Amelia Earhart herself—alive and soaring after all these years. How did Amelia survive her disappearance? What is the centuries-old secret that enables her to travel the known and unknown world, using nothing but dreams for fuel? And what is her real agenda?
The answers find Blythe charting a course for the edge of reality—and the heart of the man she loves.
"...I've enjoyed AIR to no end—it starts off as Rushdie and then parachutes off into Pynchon."—Neil Gaiman
"An entertaining read with some serious points to make about the fluidity of borders in the 21st century."—The Onion