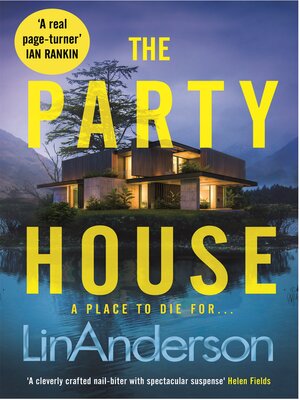 'A real page-turner' Ian Rankin
The Party House by Lin Anderson is a deeply atmospheric psychological thriller set in the Scottish Highlands for fans of Lucy Foley, Ruth Ware and Sarah Pearse's The Sanatorium.
Devastated by a recent pandemic brought in by outsiders, the villagers of Blackrig in the Scottish Highlands are outraged when they find that the nearby estate plans to reopen its luxury 'party house' to tourists.
As animosity sparks amongst the locals, part of the property is damaged and in the ensuing chaos, the body of a young girl is found in the wreck. Seventeen-year-old Ailsa Cummings went missing five years ago, never to be seen again – until now.
The excavation of Ailsa's remains ignites old suspicions cast on the men of this small community, including Greg, the estate's gamekeeper. At the beginning of a burgeoning relationship with a new lover, Joanne, Greg is loath to discuss old wounds. Frightened by Greg's reaction to the missing girl's discovery, Joanne begins to doubt how well she knows this new man in her life. Then again, he's not the only one with secrets in their volatile relationship . . .