ebook ∣ Persuader, the Enemy, One Shot, the Hard Way, Bad Luck and Trouble, Nothing to Lose, Gone Tomorrow, 61 Hours, Worth Dying For, the Affair · Jack Reacher 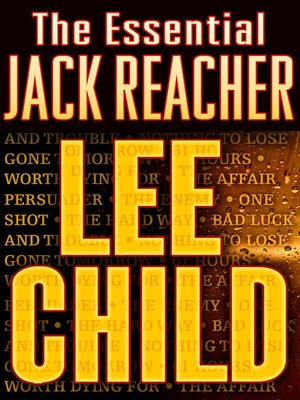 Jack Reacher is the most compelling hero in action and suspense today--hailed by Stephen King as "the coolest continuing series character now on offer" and a household name for legions of fans who can't get enough of Lee Child's #1 bestsellers.

"The truth about Reacher gets better and better."--Janet Maslin, The New York Times

Once an elite military cop, Reacher is now a man with no phone, no address, and no ties anywhere. He wanders the land and lives in the moment--a cool-headed righter of wrongs who can't let the bad guys get away with anything. This addictive eBook bundle features ten Reacher adventures, which can be read in any order. But fair warning: Once you start, you won't stop until you've finished them all.

And don't miss the preview of A Wanted Man!

"Child is a superb craftsman of suspense."--Entertainment Weekly