You Talk, We Die 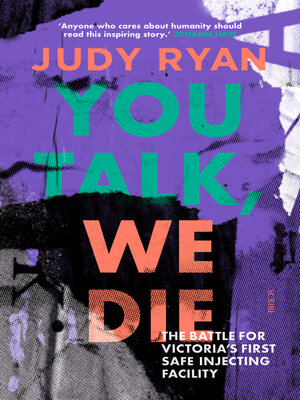 'They should do something,' I groaned. Then a frightening prospect — they might be me! What the hell could I do?

In July 2016, inner-city resident Judy Ryan found a young man — one of 'her regulars' — slumped and quiet at her gate. He had overdosed from heroin. Fortunately, that man lived. But Judy had reached breaking point. After four years in a 'war zone', where children might encounter a body on the streets, enough was enough.

Knowing little about what she was getting into, but fired with resolve, Judy launched a grassroots campaign against apathy and prejudice. While the residents fought for their neighbourhood and for the right of those suffering from addiction to be treated with the needed care and respect, they would see three coroners' reports, two elections, a private member's bill, the police finally acknowledging that arresting their way out of the problem didn't work, and more unnecessary deaths before the trial of a safe injecting facility was legislated.

A story of drugs, addiction, and a health crisis that touches people from all walks of life, You Talk, We Die is also a highly personal yet practical account of how an authentic local voice and an inclusive campaign can change the minds of business and political leaders to improve the lives of everyone in a community.