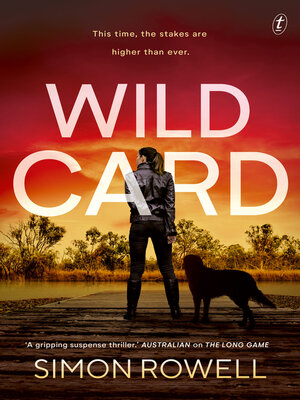 One foggy morning on the banks of the Murray River, a body is found in a burnt-out area of grassland. The heavily tattooed victim, who has suffered two bullet wounds to the head, is identified as Freddie Jones, a bikie from Moama.

Detective Sergeant Zoe Mayer is on the case, alongside her trusty service dog, Harry. Although Zoe is determined to track down the murderer, she finds herself stonewalled at every turn—by Freddie's family, his associates and even the local police. But then a second body is discovered, and soon all bets are off...

Wild Card is a gripping mystery about gang warfare and small-town corruption, featuring a crime-fighting duo like no other.

Simon Rowell has worked on outback oil rigs, managed nightclubs, been a tour guide and run marketing campaigns. He is the author of The Long Game and The Echo of Others, which was longlisted for the Ned Kelly Awards for Best First Crime in 2018. He lives with his wife, Karen, in rural Victoria on a farm full of rescued animals.

'This is a very entertaining crime novel that is elevated above much of the competition by its easy flowing style, nicely limned characters, vivid descriptions and strong sense of credibility. A terrific read.' Canberra Weekly on The Long Game

'An absolute cracker.' Urban List on The Long Game

'The start of what one selfishly hopes is a long series...with heaps of potential, good characters and an interesting, complicated and tricky central plot.' AustCrime on The Long Game