From the Sidelines to the Headlines

ebook ∣ The Legacy of Women's Sports at Trinity University 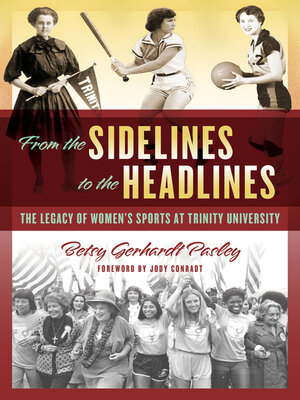 In spring 2014 Peggy Kokernot Kaplan, a former Trinity University athlete and cofounder of the women's track team, emailed her alma mater's athletic department asking the school to post statistics from the team's 1975 season. It's no surprise that they couldn't fulfill her request, for Trinity had sparse records from the 1970s—not just for track and field but for most performances by female athletes before 1991, when the school joined a NCAA Division III conference.
What started as a humble email request nearly a decade ago has culminated in The Legacy of Women's Sports at Trinity University: From the Sidelines to the Headlines, an expansive book aimed at filling in the gaps in coverage of half a century of women's intercollegiate sports. Former Trinity athlete Betsy Gerhardt Pasley and historian Doug Brackenridge, along with other members of the Trinity community, have collected hundreds of long-forgotten documents and conducted dozens of interviews with former students, coaches, and administrators to tell the fascinating, multifaceted story of women's sports at this liberal arts school in San Antonio, Texas.

While the book focuses primarily on the post–Title IX years between 1972 and 1999, its scope extends to Trinity's founding in 1869, illuminating the century-long evolution of women in competitive sports, at Trinity and elsewhere, before Title IX. The story, told alongside the cultural shifts that formed the social and athletic context for female athletes of the day, also documents the decision Trinity and other institutions of higher learning faced after Title IX: Should they adhere to a commercial model, in which a focus on athletics often overshadowed academics, or strive for a more balanced student-athlete, nonscholarship model? Trinity chose the latter and has decades of national championships and academic accolades to show for it.