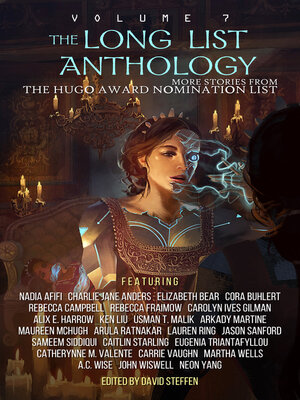 This is the seventh annual edition of the Long List Anthology. Every year, supporting members of WorldCon nominate their favorite stories first published during the selected year to determine the top five in each category for the final Hugo Award ballot. This is an anthology collecting more of the stories from that nomination list to reach more readers.

The Long List Anthology volume 7 collects 24 science fiction, fantasy, and horror stories from that nomination list, totaling over 400 pages of fiction by writers from all corners of the world. From lonely haunted houses to invincible mechsuits, from body-lending gigwork to Fae ransom letters, from space pirate radio to interstellar disputes over art ownership. There is something here for everyone.

The following stories are in the anthology:
"50 Things Every AI Working With Humans Should Know" by Ken Liu
"AirBody" by Sameem Siddiqui
"The Eight-Thousanders" by Jason Sanford
"Open House On Haunted Hill" by John Wiswell
"This is New Gehesran Calling" by Rebecca Fraimow
"The Cold Crowdfunding Campaign" by Cora Buhlert
"A Being Together Amongst Total Strangers" by Arkady Martine
"Sinew and Steel and What They Told" by Carrie Vaughn
"My Country Is a Ghost" by Eugenia Triantafyllou
"In This, At Least, We Are Alike" by Caitlin Starling
"The Ransom of Miss Coraline Connelly" by Alix E. Harrow
"Sunrise, Sunrise, Sunrise" by Lauren Ring
"The Salt Witch" by Martha Wells
"Lone Puppeteer of a Sleeping City" by Arula Ratnakar
"Color, Heat, and the Wreck of the Argo" by Catherynne M. Valente
"Yellow and the Perception of Reality" by Maureen McHugh
"An Important Failure" by Rebecca Campbell
"City of Red Midnight: A Hikayat" by Usman T. Malik
"If You Take My Meaning" by Charlie Jane Anders
"On Safari in R'lyeh and Carcosa With Gun and Camera" by Elizabeth Bear
"A Stick of Clay, in the Hands of God, is Infinite Potential" by Neon Yang
"The Bahrain Underground Bazaar" by Nadia Afifi
"To Sail the Black" by A.C. Wise
"Exile's End" by Carolyn Ives Gilman