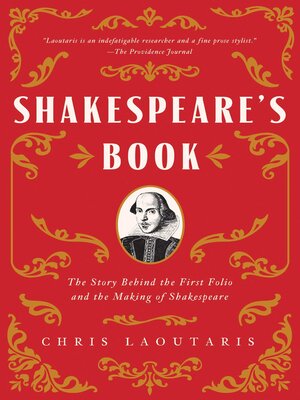 View more libraries...
The never-before-told story of how the makers of The First Folio created Shakespeare as we know him today.
2023 marks the 400-year anniversary of the publication of Mr William Shakespeare's Comedies, Histories, & Tragedies, known today simply as the First Folio. It is difficult to imagine a world without The Tempest, Twelfth Night, Antony and Cleopatra, The Winter's Tale, and Macbeth, but these are just some of the plays that were only preserved thanks to the astounding labor of love that was the first collected edition of Shakespeare's plays.

When the First Folio hit the bookstalls in 1623, nearly eight years after the dramatist's death, it provided eighteen previously unpublished plays, and significantly revised versions of close to a dozen other dramatic works, many of which may not have survived without the efforts of those who backed, financed, curated, and crafted what is arguably one of the most important conservation projects in literary history.

Without the First Folio Shakespeare is unlikely to have acquired the towering international stature he now enjoys across the arts, the pedagogical arena, and popular culture. Its lasting impact on English national heritage, as well as its circulation across cultures, languages, and media, makes the First Folio the world's most influential secular book. But who were the personalities behind the project and did Shakespeare himself play a role in its inception

Shakespeare's Book: The Intertwined Lives Behind the First Folio charts, for the first time, the manufacture of the First Folio against a turbulent backdrop of seismic political events and international tensions which intersected with the lives of its creators and which left their indelible marks on this ambitious publication-project. This story uncovers the friendships, bonds, social ties, and professional networks that facilitated the production of Shakespeare's book—as well as the personal challenges, tragedies and dangers that threw obstacles in the path of its chief backers.

It reveals how Shakespeare himself, before his death, may have influenced the ways in which his own public identity would come to be enshrined in the First Folio, shaping his legacy to future generations and determining how the world would remember him: "not of an age, but for all time."

Shakespeare's Book tells the true story of how the makers of the First Folio created "Shakespeare" as we know him today.