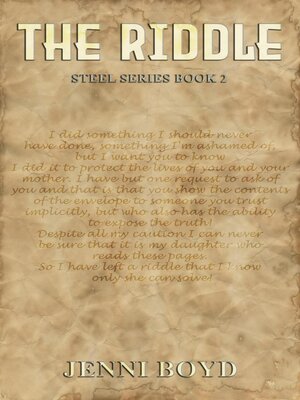 Nineteen year old Deanna Jones is bequeathed a house by her father, a man she'd never met and knew nothing about, but her aunt believes was murdered.
Deanna comes home to find an opened window and the only evidence there was a break-in is that someone searched through the sealed boxes of her father's files. She cannot report it to the police as nothing was stolen, but also has reason not to trust them.

After receiving two threatening letters, making Deanna realise the files not only hold the key as to who wishes her harm, but whether her father was murdered. In the files she uncovers a clue that leads her to a letter hidden by her father. In the letter he writes:

I did something I should never have done, something I'm ashamed of, but I want you to know I did it to protect the lives of you and your mother. I have but one request to ask of you and that is that you show the contents of the envelope to someone you trust implicitly, but who also has the ability to expose the truth! Despite all my caution I can never be sure that it is my daughter who reads these pages. So I have left a riddle that I know only she can solve!

Deanna reaches out to Jasmine Bronson, a reporter for Frontline News, who soon learns there is a link between Deanna's father and the disappearance of Max Steel's daughter Michelle. Jasmine knows she must contact Steel, not just about his daughter, but to help solve the riddle.

Steel is torn about joining forces with Jasmine, as he cannot forgive her for putting Michelle's life in further danger.

Will solving the riddle help him find Michelle, or will it only lead him further away?