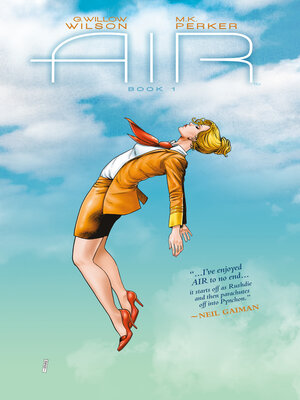 Acrophobic flight attendant Blythe has just fallen for a mysterious traveler—who may or may not be a terrorist—and she's about to embark on the strangest journey of her life.
Searching for him, Blythe will crash-land into a web of technological conspiracies, dark politics and secret organizations. When she learns that she is the only person able to control flight and reality, with science so advanced it might be magic, she'll have to break the rules of time and space for answers.

But will she reach new heights...or free-fall?

By award-winning author G. Willow Wilson (Invisible Kingdom, Ms. Marvel, The Bird King) and acclaimed illustrator M.K. Perker (The New Yorker, Mad Magazine, Fables), AIR is a high-stakes, high altitude adventure about where limits lie, and what happens when they're not only broken...but remade.
"...I've enjoyed AIR to no end—it starts off as Rushdie and then parachutes off into Pynchon."–Neil Gaiman

"The fantasy is real, and the reality is fantastic. AIR is a compelling and completely original read that thrills, surprises and delights."–Gail Simone

"An entertaining read with some serious points to make about the fluidity of borders in the 21st century."–The Onion