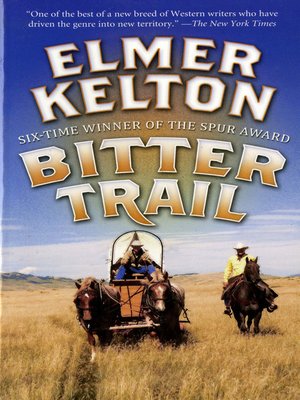 In Bitter Trail, Kelton tells the story of a tough teamster named Frio Wheeler whose wagons haul cotton from Texas to Mexico.

The problem is that the Civil War is raging throughout the South and Wheeler's cotton is to be sold for gold—gold used to buy guns and ammunition for the Confederate army.

And, added to his balky mules, the broiling heat, and killing drought of the Mexican dessert, Wheeler has even more serious matters to contend with: His wagons are attacked, his cotton bales are burned, he is captured and tortured by bandidos in league with Union sympathizers, and he is betrayed by his best friend—his former partner and brother of the woman he loves!

Elmer Kelton (1926-2009) was the award-winning author of more than forty novels, including The Time It Never Rained, Other Men's Horses, Texas Standoff and Hard Trail to Follow. He grew up on a ranch near Crane, Texas, and earned a journalism degr...

More about Elmer Kelton
Bitter Trail
Copy and paste the code into your website.
New here? Learn how to read digital books for free