What Have We Done 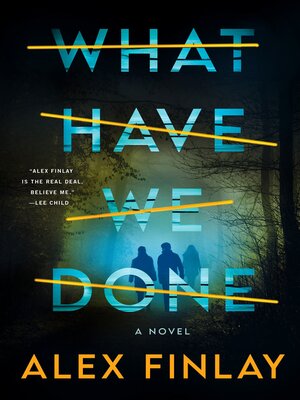 In this "top-notch mystery thriller" (Publishers Weekly, starred review) from Alex Finlay, What Have We Done is a tale about the lives we leave behind and the secrets we carry with us forever.
One of the Most Anticipated Books of 2023:

A stay-at-home mom with a past.
A has-been rock star with a habit.
A reality TV producer with a debt.
Three disparate lives.
One deadly secret.

Twenty five years ago, Jenna, Donnie, and Nico were the best of friends, having forged a bond through the abuse and neglect they endured as residents of Savior House, a group home for parentless teens. When the home was shut down—after the disappearance of several kids—the three were split up.
Though the trauma of their childhood has never left them, each went on to live accomplished—if troubled—lives. They haven't seen one another since they were teens but now are reunited for a single haunting reason: someone is trying to kill them.
To survive, the group will have to revisit the nightmares of their childhoods and confront their shared past—a past that holds the secret to why someone wants them dead.
It's a reunion none of them asked for . . . or wanted. But it may be the only way to save all their lives.
What Have We Done is both an edge-of-your seat thriller and a gut-wrenching coming-of-age story. And it cements Alex Finlay as one of the new leading voices in thrillers today.