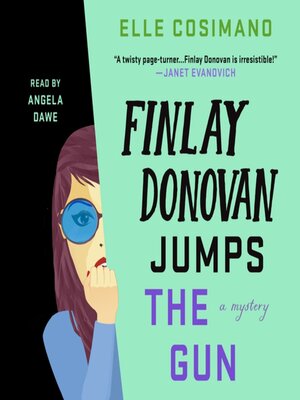 "[Longtime series narrator Angela] Dawe offers Cosimano's laugh-out-loud moments with just the right sparkle." —Audiofile on Finlay Donovan is Killing It
From USA Today bestseller and Edgar Award nominee Elle Cosimano, comes Finlay Donovan Jumps the Gun—the hilarious and heart-pounding next installment in the beloved Finlay Donovan series.
"Fresh, heartfelt and witty, Finlay Donovan Jumps the Gun is a twisty page-turner, and its relatable heroine Finlay Donovan is irresistible!" —Janet Evanovich, #1 New York Times bestselling author of the Stephanie Plum series
Dating. Diapers. And dodging bullets. Who said single moms can't have fun?
Finlay Donovan has been in messes before—after all, she's an author and single mom who's a pro at getting out bloodstains for rather unexpected reasons—but none quite like this. After she and her nanny/partner-in-crime Vero accidentally destroyed a luxury car that they may have "borrowed" in the process of saving the life of Finlay's ex-husband, the Russian mob got her out of debt. But now Finlay owes them
Still running the show from behind bars, mob boss Feliks has a task for Finlay: find a contract killer before the cops do. Problem is, the killer might be an officer.
Luckily, hot cop Nick has started up a citizen's police academy, and combined pressure from Finlay's looming book deadline and Feliks is enough to convince Finlay and Vero to get involved. Through firearm training and forensic classes (and some hands-on research with the tempting detective), Finlay and Vero have the perfect cover-up to sleuth out the real criminal and free themselves from the mob's clutches—all the while dodging spies, confronting Vero's past, and juggling the daily trials of parenthood.
A Macmillan Audio production from Minotaur Books.