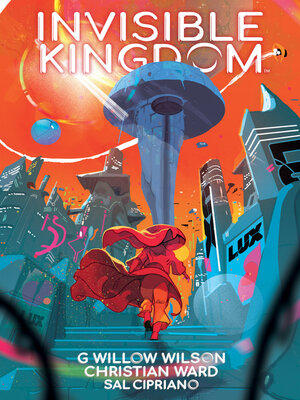 View more libraries...
The sweeping, multi-Eisner-Award winning and Hugo nominated sci-fi epic is collected in an oversized hardcover edition! This special library edition features every cover, extensive process art section, and the original pitch of this thrilling tour-de-force!
In a distant galaxy, acolyte Vess and hardened freighter pilot Grix join forces to expose an inconceivable conspiracy between the most dominant religion and an all-powerful mega-corporation. Suddenly prey in an interstellar chase through the dreaded Junk Rings to The Point of No Return, this unexpected pair is faced with a grave decision: reveal the truth or plunge the world into anarchy.
And when the valiant crew of the Sundog is captured by the dangerous Siblings of Rebirth, Vess and Grix must fight to save not only the universe, but also their newfound love—against all odds.
Praise for Invisible Kingdom:
"Sharp, funny, and utterly breathtaking, Wilson and Ward's Invisible Kingdom is a world you won't want to leave."—Kelly Sue DeConnick (Pretty Deadly, Captain Marvel)
"Invisible Kingdom is the comic I didn't know I wanted and now can't live without. It's a vitamin boost for the eyes and mind, full of great vistas of ideas. Two master creators doing a barrel roll just outside our atmosphere. You want this book."—Gail Simone (Birds of Prey, Batgirl)
"G. Willow Wilson and Christian Ward are two of contemporary comics most visionary creators, and in Invisible Kingdom they are working together at the height of their powers to tell a stunningly relevant story with rip-roaring wisdom and mind-bending visuals. Highly recommended."—Saladin Ahmed (Ms Marvel, Black Bolt)
"Invisible Kingdom isn't just for science fiction fans; it's for readers who enjoy a fast-paced narrative that also pushes boundaries. Simultaneously up close and personal yet vast in scope. It's my kind of space opera."—Nnedi Okorafor (LaGuardia, The Binti Trilogy, Who Fears Death)
"A smart pop-art feminist Star Wars. Fans of science fiction epics... will want to strap in for the longer ride."—Publishers Weekly
"One of the most unique sci-fi comics since Saga& resonates in the present day."—Bleeding Cool
"A stunning and immersive world."—Sequential Planet
"Invisible Kingdom delivers spiritual sci-fi with spectacular visual style."—The A.V. Club