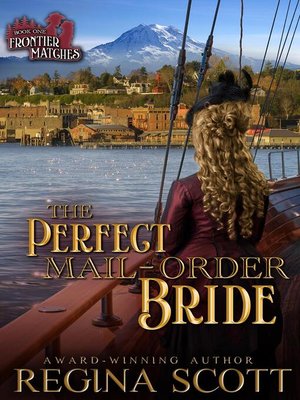 Close to perfection
Ada Williamson lived her whole life in the shadow of her charismatic, capricious sister. But when the beautiful Melinda decides to jilt her mail-order groom on the way to meet him in Seattle, Washington Territory, Ada's conscience demands that she continue the journey and tell Thomas Rankin the truth. After all, she wrote most of the letters the couple exchanged, and she's already halfway in love with the man herself. Yet somehow, one look at Thomas and the future he offers, and the truth never comes out. Suddenly, Ada finds herself not only out of the shadows, but living the life meant for her sister.

After making his fortune on the goldfields, Thomas "Scout" Rankin found he could buy almost anything he wanted, including the perfect mail-order bride in a territory where women are still few and far between. But past betrayals have left him wary, so he immediately notices that the woman who claims to be his mail-order bride doesn't quite act the part. Still, someone wrote those letters that spoke to his heart. If getting to know Ada better will reveal the truth, he's willing to try, even if he must protect his own secrets along the way.

But someone knows both their secrets and aims to use them to advantage. Can Thomas and Ada discover the truth, about their enemy, about their pasts, and about the love they both yearn to share?