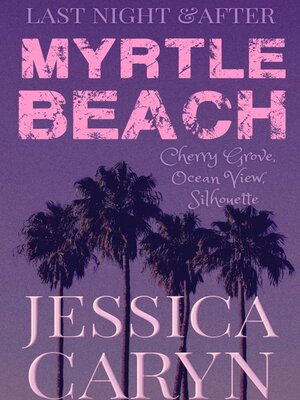 Hayden Buchanan had a crush on his neighbor, well, it was more than that, but Krista was shy, so it took months to have random conversations with her. Hayden was surprised when Krista knocked on his door. She gave him a bold kiss. The timing was off. Krista avoided him. Hayden wanted to explain. Another kiss happened with a promise to talk things out. Krista had plans, but her night ended in a confusing situation. Hayden's reaction will prove Krista can trust him.
Dex & Tammy

Their relationship started with no-holds-barred sex that led to an intimate connection. It's been romantic sunsets and cozy mornings until Dex's work obligations caused strain on their quality time. Date nights were cancelled, and heartfelt apologies were made, but an unwanted guest comes to the beach resort. Tammy's past will get tangled with Dex's professional life.
Murphy & Juliana

Murphy Hayward was open to whatever the night would bring. A dark-haired beauty drew his attention. One provocative dance with Juliana De Araújo led to a night in bed. She left without leaving her number. Myrtle Beach Resort & Villas was Juliana's last known location. Murphy's work week went to hell and there were issues at the Corporate Residence. Murphy rented a suite at the resort in hopes he and Juliana would reconnect. Luck was on his side. She was there. Will it be better the second time around?

He was surprised when she asked about him renting a place. Flynn wanted Kimber, so friends-with-benefits wasn't an option. They figured it out, and it was a win-win until he got off work early one night. Kimber will feel what it's like to be with a man who takes her desires to heart.

Things never came easy for Desiree Leroux. She spent three years managing Silhouette with Keith while hiding her feelings for him. A woman in her right mind would keep making her cash, but her heart didn't agree. Desiree wanted it all. Keith Fuller always put business first, but the tension with Desiree reached its breaking point. It happened at the worst time. There was a thin line between work and lust. Jealousy fuels the existing heat between them. Keith will prove his loyalty.

Ashley rented a studio apartment and was paying off her debt. She wasn't in the holiday spirit and would've been okay with staying in Myrtle Beach for Christmas. Joey talked sense into her. Ashley went home to spend time with her family. Things were good until she found out Joey was at a party with his ex-girlfriend. He ended the call without explaining. Ashley's feelings were hurt. She went out to let off steam and ended the night in her ex-boyfriend's bed. Sometimes, things aren't what they seem, and earning Joey's trust might be easier said than done.

Everything was falling into place for Calista Montoya. She didn't like being messy and was open and honest about dating. A last-minute cancellation had her ringing in the New Year with friends. Calista was ready for everything the night would bring but didn't expect to meet Kildare Jackson. He was quiet one minute and passionate the next. Calista was determined to have all her heart desired. Kildare Jackson's life was work, sex, repeat. He checked Calista out before she sent her number his way, but there's trouble around the corner. Kildare didn't think twice about protecting Calista. He knew having her in his space could cause stress and expose issues he wanted to hide. Kildare will have to decide if she's worth the risk.