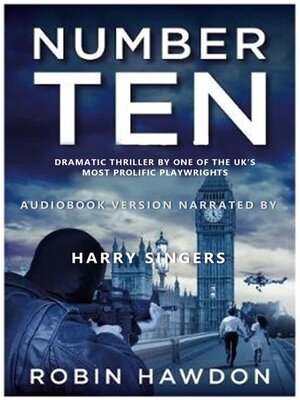 Unknown forces create terrorist attacks across the UK, and then attempt to assassinate radical new British Prime Minister, James Torrence. A bright young member of the PM's staff, Paul Gunter, is arrested by MI5 and finds himself falsely implicated in the assassination attempt. He has to fight for his life against all the powerful involved parties, using his inside knowledge of Downing Street processes, and the reluctant help of senior staff member, Andrea Holt, to extricate himself.

Suspense, romance, and high action ranging across modern London's extraordinary cityscape and beyond.

"This is a blinder from Robin Hawdon. It actually felt as though it was me hurtling through this harrowing adventure in the madness which is 21st century Britain."

"It must surely be made into a TV series. Better than 'The Bodyguard' "

"I never can resist a book that involves my ex work, some are good, this was outstanding, with a fabulous twist at the end." Book Mark, top 500 Amazon Reviewer

"Wow! Number Ten begins in explosive fashion and maintains a high-octane, fast pace until the very last word. A glorious thriller that kept me enthralled throughout... Would make the most fabulous television series." Linda Hill, top 500 Amazon Reviewer

Robin Hawdon is one of Britain's most prolific novelists and playwrights, with productions in over forty countries and twenty languages. https://www.robinhawdon.com/