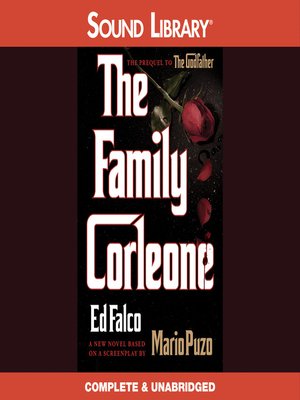 New York, 1933. The city and the nation are in the depths of the Great Depression. The crime families of New York have prospered in this time, but with the coming end of Prohibition, a battle is looming that will determine which organizations will rise and which will face a violent end.

For Vito Corleone, nothing is more important that his family's future. While his youngest children, Michael, Fredo, and Connie, are in school, unaware of their father's true occupation, and his adopted son Tom Hagen is a college student, he worries most about Sonny, his oldest child. Vito pushes Sonny to be a businessman, but Sonny—seventeen years-old, impatient and reckless—wants something else. He wants to be like his father, and become a part of the real family business.

An exhilarating and profound novel of tradition and violence, of loyalty and betrayal, The Family Corleone carries on the legacy of The Godfather for a new generation.

Ed Falco is the New York Times bestselling author of numerous novels, short stories, and poetry. His work has been published in the Atlantic Monthly, Playboy, and TriQuarterly. He won the Richard Sullivan Prize in 1995 for Acid and has received ma...

More about Ed Falco
The Family Corleone
Copy and paste the code into your website.
New here? Learn how to read digital books for free