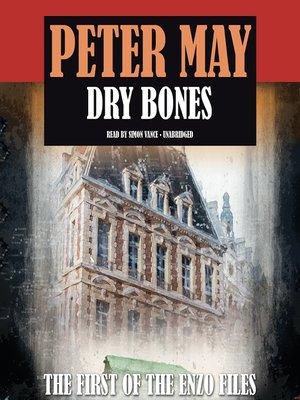 by Peter May Author · Poisoned Pen Press Other

What happened to Jacques Gaillard? The brilliant teacher at the École Nationale d'Administration, who trained some of France's best and brightest as future prime ministers and presidents, vanished ten years ago, presumably from Paris. This ten-year-old mystery inspires a bet—one that Enzo Macleod, a biologist teaching in Toulouse, France, instead of pursuing a brilliant career in forensics back home in Scotland, can ill afford to lose. The wager is that Enzo can find out what happened to Jacques Gaillard by applying new science to a cold case.

Enzo goes to Paris to meet journalist Roger Raffin, the author of a book on seven celebrated unsolved murders, the assumption being that Gaillard is dead. He needs Raffin's notes, and armed with these, he begins his quest. It quickly has him touring landmarks such as the Paris catacombs and a château in Champagne, digging up relics and bones. Then Enzo finds the actual head of Jacques Gaillard. The artifacts buried with the skull set him to interpreting the clues they provide and following in someone's footsteps—maybe more than one someone—seeking the rest of Gaillard's remains and reviewing some ancient and recent history. As with any quest, it's as much discovery as detection, and Enzo, despite all his missteps, proves to be an ace investigator, scientific and intuitive, who definitely meets his goals.

More about Peter May
Dry Bones
Copy and paste the code into your website.
New here? Learn how to read digital books for free