The Reefs of Time

By Jeffrey A. Carver 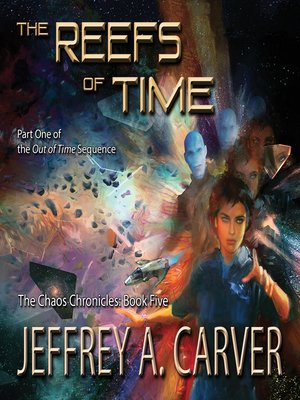 The starstream is beautiful. But beauty turns deadly when an ancient AI bent on destruction uses it to travel uptime, to humanity's future.

The Mindaru are dead. Or so exiled-Earthman John Bandicut and his alien companions believe, after their intervention to save the Orion Nebula and surrounding worlds. But now a part of this ancient and malicious AI colony is swarming toward the present from its birthplace deep in the past.Their opening: a temporal disturbance in the starstream, a hyperspatial thoroughfare used by myriad civilizations. The disturbance emanates from the planetary defenses of nearby Karellia, whose people know nothing of the starstream or the galaxy-threatening Mindaru.

Only Bandicut and his friends have the knowledge and experience to act. But several of Bandicut's company have gone missing. Bandicut and Li-Jared must team with the pandimensional Ruall and her gokat—the oddest aliens Bandicut has met since the shadow-people—and journey to Karellia to find a way to cut off the timestream.

Separated from the others, Ik meets another human of Earth—a former lover of Bandicut's—and embarks with her on a perilous mission far back into deep time, seeking a way to stop the Mindaru at their source.

The Chaos Chronicles returns at last in The Reefs of Time, part one of a heartstopping, two-part adventure. Concluded in Crucible of Time, from the Nebula-nominated author of Eternity's End.

"Jeffrey A. Carver's remarkable long-awaited duology The Reefs of Time / Crucible of Time is a welcome addition to The Chaos Chronicles, certifying his continuing mastery of action and adventure at the boundaries of space opera and hard SF." —Steve Miller, The Liaden Universe