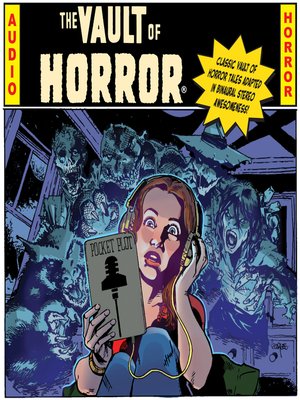 When the history of horror comics was written, one name stood and still stands above the rest: EC Comics. With equal parts suspense, gore, camp, and revenge, the triumvirate of EC's horror output laid the groundwork for what was to come from many of the genre's greatest writers and directors.

Now, Pocket Universe Productions (producers of the X-Files and Locke & Key audio dramas) presents EC's The Vault of Horror, its stories adapted and presented in an audio-rich fully immersive setting complete with a full cast, scoring, and soundscapes. This ghastly grimoire adapts issues #12 to #17 of the classic horror series, with werewolves, vampires, cutthroats, and numerous ne'er-do-wells!

Starring Kevin Grevioux (creator of the Underworld film franchise) as the Vault Keeper, and special guests Phil Proctor of the Firesign Theatre and Denise Poirier (MTV's Æon Flux), this series is going to chill your spine and clam your palms! So put your headphones on and enter The Vault of Horror! It's a real scream!