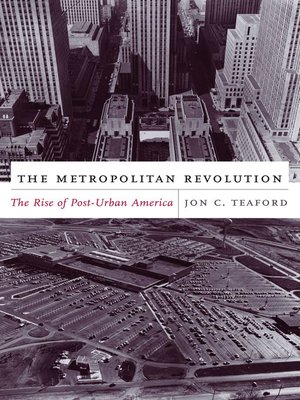 In this absorbing history, Jon C. Teaford traces the dramatic evolution of American metropolitan life. At the end of World War II, the cities of the Northeast and the Midwest were bustling, racially and economically integrated areas frequented by suburban and urban dwellers alike. Yet since 1945, these cities have become peripheral to the lives of most Americans. "Edge cities" are now the dominant centers of production and consumption in post-suburban America. Characterized by sprawling freeways, corporate parks, and homogeneous malls and shopping centers, edge cities have transformed the urban landscape of the United States.

Teaford surveys metropolitan areas from the Rust Belt to the Sun Belt and the way in which postwar social, racial, and cultural shifts contributed to the decline of the central city as a hub of work, shopping, transportation, and entertainment. He analyzes the effects of urban flight in the 1950s and 1960s, the subsequent growth of the suburbs, and the impact of financial crises and racial tensions. He then brings the discussion into the present by showing how the recent wave of immigration from Latin America and Asia has further altered metropolitan life and complicated the black-white divide. Engaging in original research and interpretation, Teaford tells the story of this fascinating metamorphosis.

The Metropolitan Revolution
Copy and paste the code into your website.
New here? Learn how to read digital books for free