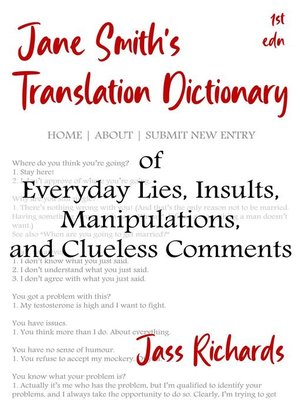 Jane Smith is a character In my novel A Philosopher, a Psychologist, and an Extraterrestrial Walk into a Chocolate Bar (blurb below). And she started this dictionary. I've continued it. And everyone else is supposed to finish it. Well, add to it. (It's unlikely it'll ever be finished.) Send additions – new definitions to the entries already listed and/or completely new entries – for future editions to me (via my website). (Additionally, you can add your entries to the tumblr page I set up, hoping it would become viral like "Everyday Sexism" and "Why I'm a Feminist" and #MeToo. Sadly, it did not.)

A Philosopher, a Psychologist, and an Extraterrestrial Walk into a Chocolate Bar: When a self-appointed independent activist and her office-temp-with-a-doctorate buddy embark on a quest for a chocolate bar (a bar that serves not alcohol, but chocolate – in all its deliciously decadent forms), they pick up a hitchhiking extraterrestrial who's stopped on Earth to ask for directions. Trying to explain Earl (Earth), confronting sexism (rather like bashing your head against a jellyfish), and committing assorted outrageous acts and everyday rebellions, they help "X" find the information she needs to get back home – and go with her – to become chocolate bartenders. A (way) off-the-beaten-path first contact story.

Jane also started a list titled "And here's something else that would never happen to a man ..." – which I include at the end of the dictionary (it's also in Sexist Shit that Pisses Me Off, 2e). I created a tumblr page for this as well, similarly hoping it would become viral, but, similarly, it did not. Pity. (But it's not too late! Add your additions to the page and send them to me for future editions of the Dictionary.)