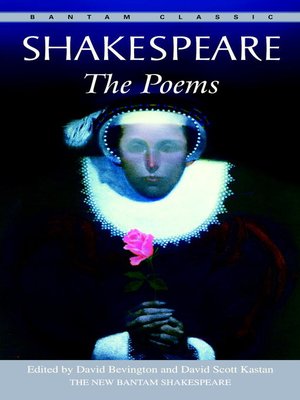 View more libraries...
The Poems
Shakespeare’s greatest achievement in nondramatic verse was his collection of 154 magnificent sonnets that portray a tumultuous world of love, rivalry, and conflict among a poet, an aristocratic young man, a rival poet, and a mysterious “dark lady.” More profound than other Elizabethan sonnet sequences and never surpassed as archetypes of the form, these poems explore almost every imaginable emotional complexity related to love and friendship. Some poems are dark, bitter, and self-hating, others express idealism with unmatchable eloquence–and all are of quintessential beauty, part of the world’s great literary heritage.
In addition to his sonnets, Shakespeare published two long poems early in his career: Venus and Adonis and The Rape of Lucrece. Immediately popular in Shakespeare’s time, they display a richness that can also reward us with insights into the powerful imagery of his plays.
Rounding out this volume are two minor poems, “A Lover’s Complaint” and “The Phoenix and Turtle,” thought to be part of Shakespeare’s early writings.