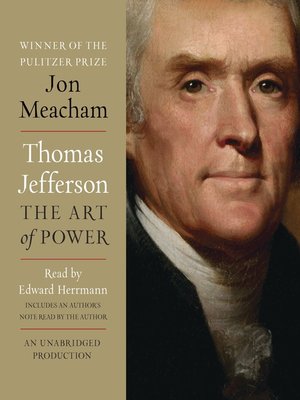 The Art of Power

Biography & AutobiographyHistoryNonfiction
NAMED ONE OF THE BEST BOOKS OF THE YEAR BY
The New York Times Book Review
In this magnificent biography, the Pulitzer Prize–winning author of American Lion and Franklin and Winston brings vividly to life an extraordinary man and his remarkable times. Thomas Jefferson: The Art of Power gives us Jefferson the politician and president, a great and complex human being forever engaged in the wars of his era. Philosophers think; politicians maneuver. Jefferson's genius was that he was both and could do both, often simultaneously. Such is the art of power.

Thomas Jefferson hated confrontation, and yet his understanding of power and of human nature enabled him to move men and to marshal ideas, to learn from his mistakes, and to prevail. Passionate about many things—women, his family, books, science, architecture, gardens, friends, Monticello, and Paris—Jefferson loved America most, and he strove over and over again, despite fierce opposition, to realize his vision: the creation, survival, and success of popular government in America. Jon Meacham lets us see Jefferson's world as Jefferson himself saw it, and to appreciate how Jefferson found the means to endure and win in the face of rife partisan division, economic uncertainty, and external threat. Drawing on archives in the United States, England, and France, as well as unpublished Jefferson presidential papers, Meacham presents Jefferson as the most successful political leader of the early republic, and perhaps in all of American history.

The father of the ideal of individual liberty, of the Louisiana Purchase, of the Lewis and Clark expedition, and of the settling of the West, Jefferson recognized that the genius of humanity—and the genius of the new nation—lay in the possibility of progress, of discovering the undiscovered and seeking the unknown. From the writing of the Declaration of Independence to elegant dinners in Paris and in the President's House; from political maneuverings in the boardinghouses and legislative halls of Philadelphia and New York to the infant capital on the Potomac; from his complicated life at Monticello, his breathtaking house and plantation in Virginia, to the creation of the University of Virginia, Jefferson was central to the age. Here too is the personal Jefferson, a man of appetite, sensuality, and passion.

The Jefferson story resonates today not least because he led his nation through ferocious partisanship and cultural warfare amid economic change and external threats, and also because he embodies an eternal drama, the struggle of the leadership of a nation to achieve greatness in a difficult and confounding world.
Praise for Thomas Jefferson: The Art of Power

"This is probably the best single-volume biography of Jefferson ever written."—Gordon S. Wood

"A big, grand, absorbing exploration of not just Jefferson and his role in history but also Jefferson the man, humanized as never before."—Entertainment Weekly
"[Meacham] captures who Jefferson was, not just as a statesman but as a man. . . . By the end of the book . . . the reader is likely to feel as if he is losing a dear friend. . . . [An] absorbing tale."—The Christian Science Monitor
"This terrific book allows us to see the political genius of Thomas Jefferson better than we have ever seen it before. In these endlessly fascinating pages, Jefferson emerges with such vitality that it seems as if he might still be...
Biography & AutobiographyHistoryNonfiction

Jon Meacham received the Pulitzer Prize for American Lion, his bestselling 2008 biography of Andrew Jackson. He is also the author of the New York Times bestsellers Franklin and Winston and American Gospel. Executive editor and executive vice pres...

Jon Meacham received the Pulitzer Prize for American Lion, his bestselling 2008 biography of Andrew Jackson. He is also the author of the New York Times bestsellers Franklin and Winston and American Gospel. Executive editor and executive vice pres...

More about Jon Meacham
Thomas Jefferson
Copy and paste the code into your website.
New here? Learn how to read digital books for free